You are here: Home / Kidney Dialysis / Can I Eat Quinoa On A Renal Diet? 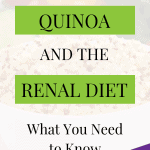 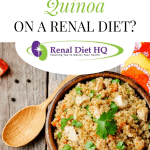 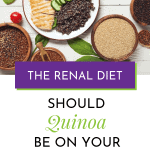 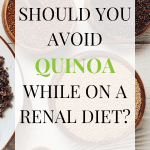 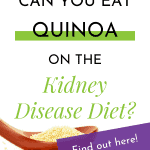 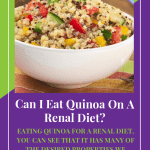 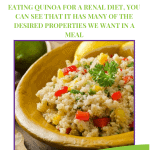 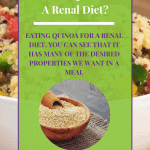 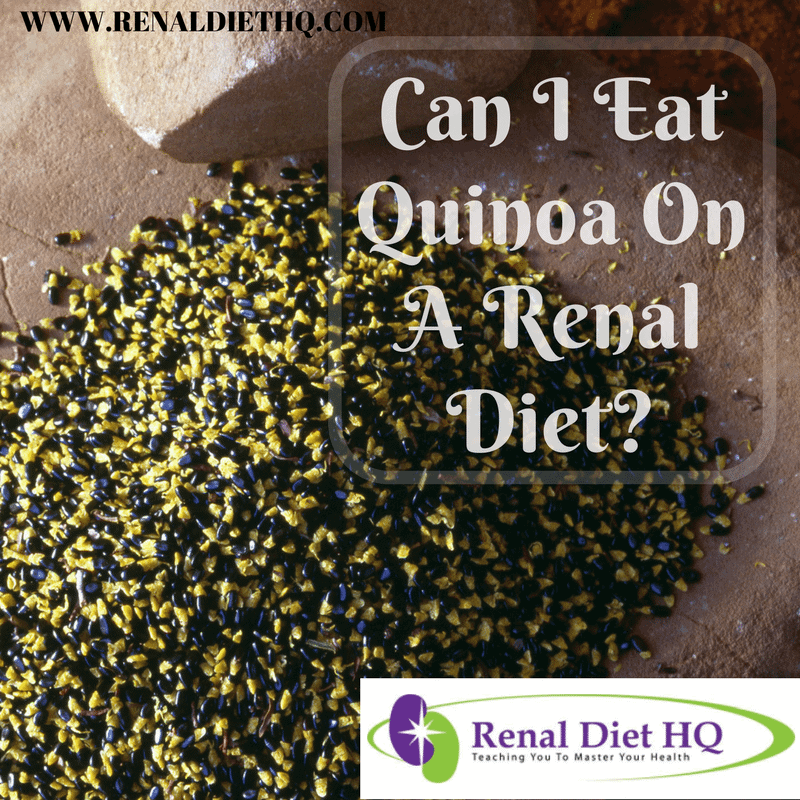 Quinoa On A Renal Diet

Learning more about the variety of starches out on the market is invaluable.  Quinoa, pronounced (Keen – wah) is a versatile product that is actually a seed.  Looking quinoa for a renal diet, you can see that it has many of the desired properties we want in a meal.

1 cup dry quinoa, has 626 calories, 24 gm protein, 109.1 gm of carbohydrate, and 12 gm fiber.  You should realize that it expands to 4 times it’s size when cooked!  So, 1 cup dry = 4 cups cooked quinoa!  Wow, that really makes for a full stomach on just a little bit of food.  You could eat 1 cup quinoa for 160 calories, 6 gm protein, 28 gm carbohydrate and 3 gm of fiber.  That is a healthy side dish, and you don’t even need to add meat!  As a person on a renal diet, if you need to restrict protein, you can easily eat this and add some low potassium vegetables to the meal and you are set for a filling dish that didn’t go over your needs but filled you up.  And you can feed this to your whole family.

A Simple Introduction To Quinoa

This is a food that is both old and new; as an ancient staple and a rediscovered foodie favorite. If you have noticed quinoa at all, you know what everyone is saying about it. Can it be that quinoa is the perfect food for you and your family? Could quinoa be the one new ingredient you try this year that changes the way you cook? Quinoa is all that and a powerhouse of nutrition, flavor and texture. Let’s take a brief look at this super-food and why it is quickly becoming all the rage. 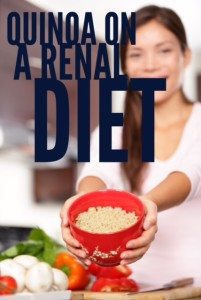 Those who are not yet familiar with quinoa, may think of it as a grain, or at least a replacement for grains. The little tiny disc is actually a seed of a plant in the same family as beets, chard, and spinach. These nutritious, amino acid rich seeds are light and fluffy when cooked, with a little snap to it. You’ll also find quinoa in a variety of beautiful colors such as gold, red, and even black.

While relatively new to the US market, quinoa has been cultivated in Peru, Chile, and Bolivia for over 50 centuries (that’s right, I said centuries!) and is a staple food in their diets. The Incas considered quinoa a sacred food and referred to it as the “mother seed,” which is why we often refer to it as “Gold of the Incas.”

When Spanish conquistadors were trying to gain control of the South American indigenous people, they destroyed the fields in which quinoa was grown, and outlawed the farming and sale of quinoa. In 1980, two Americans re-discovered the health and nutrition potential of quinoa and started commercial cultivation in Colorado. Today, quinoa is finding its way into homes and restaurants all over the map.

For being such a tiny little seed, quinoa is a complete protein, containing all nine essential amino acids. Quinoa is also a great source of manganese, magnesium, folate, phosphorus, and lysine, which is essential for tissue growth and repair. The minerals contained in relatively high amounts may also be especially helpful for those people who have consistent migraines, diabetes, and atherosclerosis.

One of the most highly valued aspects of quinoa for many people is it is gluten free. Those looking for alternatives for wheat and other gluten foods can turn to quinoa in several forms to replace the gluten in their diets.

How to Eat Quinoa

The quinoa seeds are naturally covered by a saponin residue that is bitter to the palate. This is one defense mechanism the plant has to fend off the occasional passing critter that wants a snack. While commercial cultivation processes remove much of the saponin that coats the seed, it is still a good idea to rinse the seeds in cold water to make sure the process is complete. However, there are many brands that are pre-rinsed. You can use your own judgment.

Once you have the quinoa rinsed, bring a pot of one part quinoa and two parts water to a boil, cover, and simmer slowly for fifteen minutes, or until the the water is absorbed and the quinoa is tender. If you want to keep more of the natural nutty flavor, you can dry roast the seeds before cooking them. Put the quinoa in a skillet over medium heat and toss, just until the quinoa becomes fragrant.

Now you have a multitude of options for preparing your quinoa. Whether you like it hot or cold, you can put it into a salad or in a soup. You can also form your cooked quinoa into patties with a variety of ingredients. Go ahead and add cooked quinoa to your favorite pancake or muffin recipe for a brand-new take on healthy eating.

No matter if you are looking for a gluten free alternative to grains, or you are a person on a renal diet who is just looking for something new to experiment with, or you want to give your nutrition a real boost, give quinoa a try. With all the possibilities, you could easily create a quinoa creation for every day of the year!