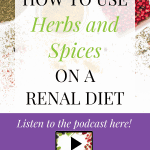 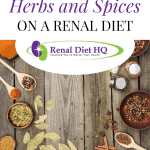 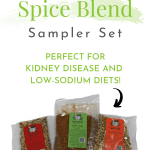 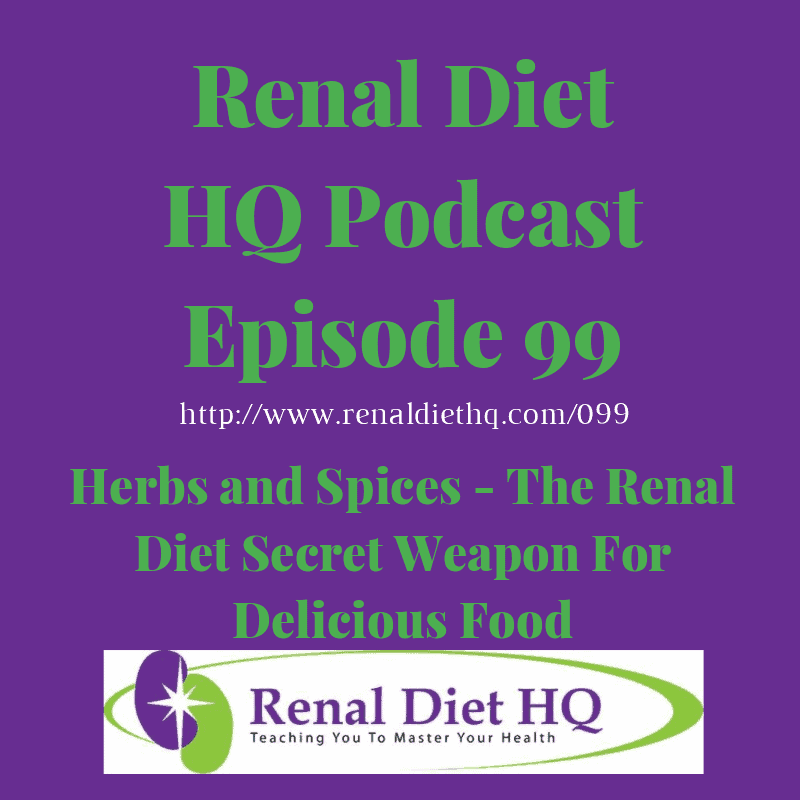 Hi there! It’s Mathea Ford with Renal Diet HQ and I want to talk about herbs and spices. The renal diet secret weapon for delicious food.

A lot of people when they find out they’re on a kidney disease diet or renal diet, they think it means no flavor – no salt, no spices – nothing that is going to make your food delicious. All of a sudden you have to eat bland, dry cardboard and that’s not true and if you’ve read any of my recipes or anything on the website you know that I believe that spices are very important to a kidney disease diet.

I want to talk through some ways that you can add some spices and flavor without a lot of heavy sauces or dressing so you’re not going to have to wave goodbye to flavor. You really can have a lot of flavor in food and as a matter of fact, the flavor is almost better than the salt once you get over that hump of getting rid of the salt and that’s this new secret weapon that I’m going to talk to you about with are herbs and spices.

Herbs can add so much flavor to a dish. Just think about this. Okay? If you’ve ever had salsa which I know
it’s tomatoes and you’re thinking you can’t have tomatoes but stick with me. If you’ve ever had salsa and you’ve added a little bit of cilantro, you know that that adds flavor it’s more flavorful, more delicious than without cilantro. Now, if you cut the cilantro wrong, granted it tastes like soap but for the most part in salsa you have onions, you have tomatoes, you maybe have some jalapenos, you have a little bit of lime juice but you add that cilantro and it gives it the right flavor. You can even add a little cumin. I love cumin. You’re adding flavor without adding all the salt.

These are five ways you can use herbs and spices:

Make a marinade. Olive oil is a great companion and a condiment for kidney disease because it’s heart-healthy, it’s got those mono and polyunsaturated fats in it, it’s liquid at room temperature it’s good for you. Adding some herbs to olive oil in a ziploc bag to marinate meats before you grill them is a really good way to get some extra flavor. You can even pour that marinade on your steak although you want to make sure you know you’re cooking it you don’t want that raw marinade on there when you’re done. But marinating your meat before you cook it, adding those spices soaks in you know you can stab the steak or whatever with the fork for a little bit and then add that flavor. So, make it in the marinade, adding spices and I’m going to go through some spices but adding spices is delicious to a meat.

Number two is making a dry rub. If you love barbecue food, you know that a dry rub is one of the ways that they make a barbecue so there’s the wet barbecue sauce which has got a lot of salt in it or there’s a dry rub that you could use that would be a way to get extra flavor without so much extra salt or sugar of the regular barbecue sauce. So, you might add some you know a little bit of pepper and a little bit of cumin and some other spices to
make it a good delicious barbecue rub.

Use number three: Put it on a salad. While it’s tempting to pour on the dressing that can have a lot of salt in it and I want to give you an idea of a way it can be just as tasty with some fresh herbs so think about adding like basil, dill or chives to a little bit of olive oil and some balsamic vinegar to liven up the salad. You don’t have to get the start with the dressing.

Another thing I wanted you to know about in the store at Nickannyskitchen.com which is N-I-C-K A-N-N-Y-S K-I-T-C-H-E-N.com Nickanny’s Kitchen up at that below, I have what are called these salad spice and they come as ten packs or yeah ten packs so this is spices that you can just put on your salad. You leave your salad a little bit damp and then you can sprinkle this on. This one’s ranch so it has a little bit of dry dehydrated onion, a little bit of buttermilk and some spices and it gives it that Ranch flavor without actual Ranch dressing which is high in sodium. These do have sodium in them so it has 180 milligrams per packet but typically that’s better than a Ranch
dressing that you might use so you might want to head on over there you can get ten packets and I think it’s like $12.99 and these are easy to take with you places so you can have them in your purse or in your bag. So, just that. That’s great for a salad.

Other things like I said like basil and dill, a little olive oil, vinegar is a great way to have on a salad.

Number four: you can use them as a sauce. You can create a sauce with them so Dannette you asked does it have MSG and it does not contain MSG, it does contain milk these right here on this salad spice. So no MSG. They do have a little bit of milk and it’s just buttermilk, dehydrated onion, sugar, sea salt, spices and dehydrated garlic. So, okay, as a sauce, you can create a renal friendly version of like a basil pesto which using some salt free nuts. Pine nuts you can grind up or some walnuts that you can grind up you can do those things or like using some mustard powder to make a vinaigrette. All those things I love balsamic vinegar and I love the flavor that it adds. You may not like it you, may find that you like apple cider vinegar more or rice vinegar but vinegar is perfect because it’s not salty and it does have that zing to it but you can use lemon juice, lime juice that type of stuff. But mixing those nuts salt-free nuts with some spices you can make the flavor really good and make like your own sauce for like a butter sauce for noodles with a little bit of flavor in it and you’re reducing the sodium that you’re taking in.

And number five: in your drinks. Think about putting some herbs into an ice cube tray and giving yourself some fun flavors for drinks so maybe a little lemon or rosemary or cucumber stick it in there freeze it. You can put a little cinnamon in, some ice cubes for some cider and all of those things can add a little flavor kind of as they’re melting so they make really good. I love basil and I love cucumber so I would take some, chopped up some cucumbers and some basil put them in the ice cubes and that way as I’m cooling my drink I’m adding a little flavor so that’s a fun way to add it.

I also want to let you know about another product that’s in the store, the Nickanny’s Kitchen store, so I just added this if you go over there, we have full sizes on these different… We have a full size it’s called Garlic and More, we have a full-size Toasted Onion and we have a full-size Texas Twist and Texas Twist is actually the most popular one. It’s a peppery blend of four different peppers, it’s pretty spicy but it takes away the need for salt and I think that’s why people buy it over and over. But I wanted you to know we have a three-pack if you just get these three spices they’re about an ounce each and then you also get all five… you get 15 recipes printed recipes with this and none of these have salt these are all salt-free and they are gluten-free and non-irradiated. You can go over and you could buy a sample pack try these see which one you like the best and these are made and they also have the potassium and phosphorus on the listing so on the Nutrition Facts label it tells you a potassium and phosphorus amounts in the servings so you can stay on track if you’re watching those. But I wanted you to know that’s available over there at nickannyskitchen.com, you just go to the front page it’s got the little packets of spices so I send you that plus the 15 recipes, five each for each of these and you get the opportunity to try them out and see which one you like. I actually used the Toasted Onion in my ham, in my meatloaf the other day and it was delicious.

In conclusion, I wanted to talk today about herbs and spices not because I make them, not because they’re anything else but a way to get less salt in your diet and have a healthier diet. So, they can unlock a world of tasty recipes in a world of flavor when you take that salt out that are in line with a kidney-friendly diet.