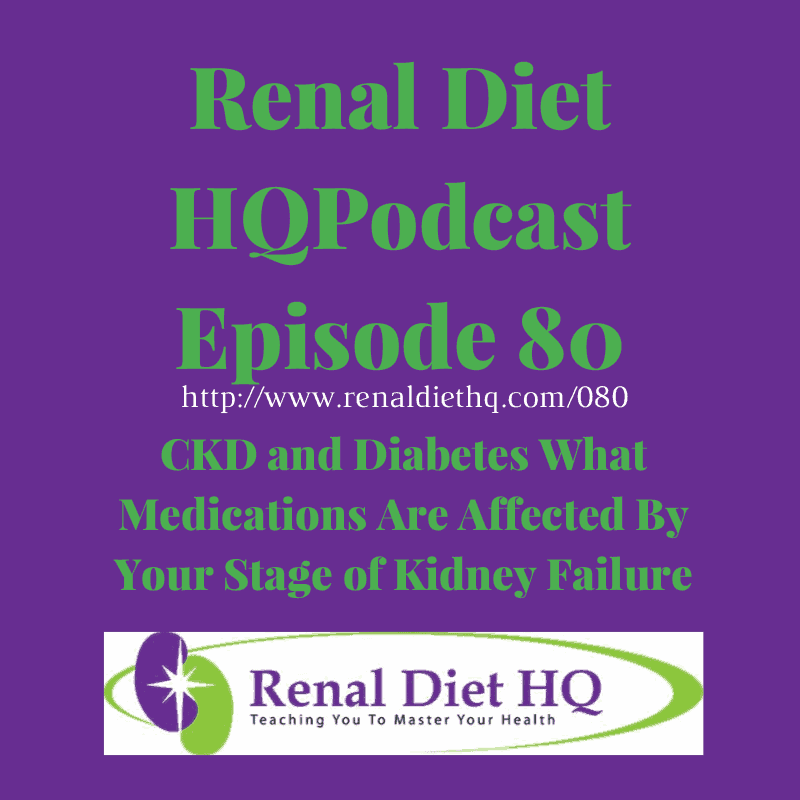 CKD And Diabetes: What Medications Are Affected By Your Stage Of Kidney Failure

If you have diabetes and you have kidney failure, your amounts of medications or specific medication that you’re taking may be affected. I want to go over some of that.

I just want to go over some of the medication and the highlight for you the differences and then you need to talk to your doctor about it. What you can do is go to them with the information and ask them if your medications are properly done or if there’s a different medication you should try based on your stage of kidney disease.

Basically, there are different types and ways that medications affect your kidneys and affect how they adjust your blood sugar. A lot of people with kidney disease got it because they have diabetes because they may have had poorly controlled or just over a  long period time it caused damage your kidneys.

There are medications called DPP-IV inhibitors and what they do is they increase a peptide in your body that by reducing an amount of an enzyme that usually takes out that peptide.

These are typical because they’re not affecting your insulin directly or your blood sugar directly, they tend to not have a high incidence of hypoglycemia, low blood sugar so these medications just to help you understand specifically are like Januvia also known as Sitagliptin, Onglyza and Nesina.

A lot of medications like Januvia, this says has a 3.8 fold increase in the availability of patients with severe renal impairment so they recommend that you decrease the dose if you have a certain level of Creatinine clearance which is less than 50 mils per minute. Also, they recommend for Onglyza that the dose be decreased because it’s also effective renally, released renally.

There’s another medication called Trajenta, also known as linagliptin and it’s more useful because only about 5% of it is eliminated through your kidneys so it’s not as likely to affect your kidneys so they recommend that that one be more used more often.

There’s another class of medications that basically, they are called glp-1 agonists and they stimulate your glucose dependent insulin secretion so that means when you have too high of a blood glucose these glp-1 agonists help that to stimulate the release of insulin to bring down your level of Glucose.

Byetta and Bydureon have been studied a little bit and then Victoza is also studied but not very much so there’s another one called Trulicity and the recommendations on those are: the Abliglutide, Tanzeum is recommended levels of creatinine clearance and liraglutide which is also Victoza. Just those are the shots they usually take, they’re pretty popular they work pretty well but but they can be affected by the amount of kidney damage you have. Haven’t been studied highly so it’s going to matter, you just want to watch your blood sugar.

Email me at [email protected] for suggestions