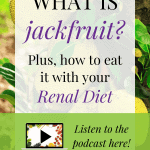 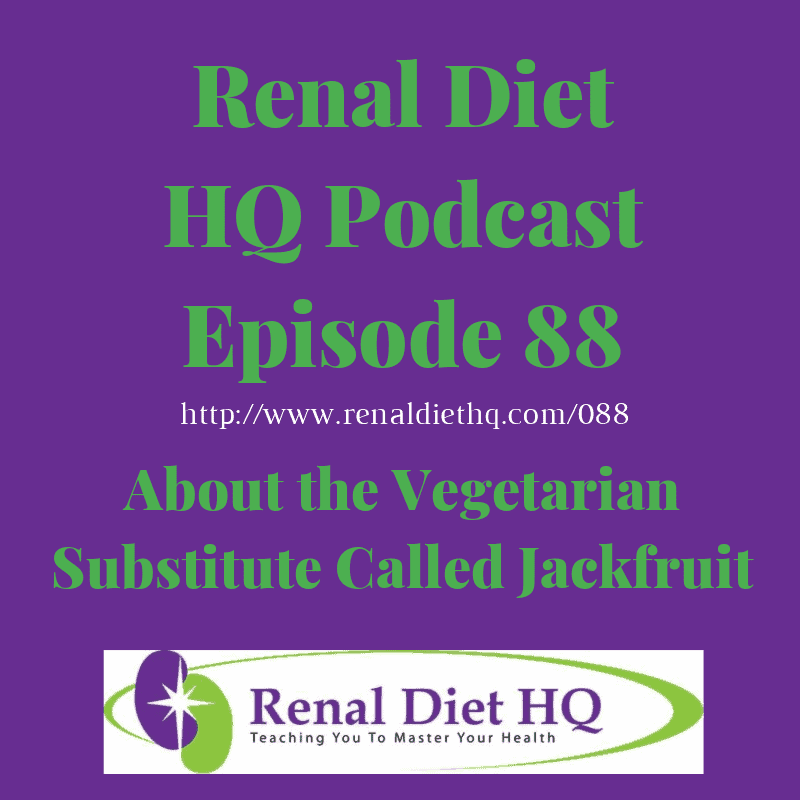 A Vegetarian Substitute Called Jackfruit That Is Perfect For Kidney Diets

Hi there! It's Mathea Ford with Renal Diet HQ and today I want to talk about a vegetarian meat substitute called Jackfruit.  Although it's technically not a meat substitute because it doesn't have any protein.  I'm talking about vegetarian stuff this month because I think it's important for people with kidney failure.  I hear a lot of comments from people that they want to try vegetarian meals to improve their health. They want to go vegetarian or vegan knowing that there's a lower amount of protein needed in chronic kidney disease and it's easier to do with a vegetarian diet.  So I want to talk to you about this particular product because it's something that you can probably find locally and maybe even incorporate it into some meals.

If you've ever seen the BuzzFeed Tasty recipes videos that have a vegetarian slant to them you may have seen fruit from the jackfruit tree being used in those recipes. You might wonder where to buy jackfruit?  It's such a versatile fruit for use and you can find ripe jackfruit in the grocery store locally or on Amazon.  Ripe jackfruit is a product that people can use and it's just a little different so you might be a little bit afraid of it.   I hope by the end of this training that you're going to have a better idea of what it actually is and what it's actually good for in a renal diet.

It's a species of tree fruit in the fig mulberry breadfruit family. It was originally from India but it's grown in Southeast Asia, Indies, Philippines, Thailand, and Indonesia. It's actually even grown in the United States in Florida instead of importing it from Southeast Asia.  That's where a lot of the ripe jackfruit that's in grocery stores and available on Amazon, for example, is grown.  So, it grows in a lot of different places. It needs to be a little bit tropical which is why Florida works because the climate is similar to the region it came from. It's also found in Hawaii because that's a little bit of a tropical environment too. So, there are some places that can be found and purchased in the United States.  I wanted you to know that it's a very safe choice of product if you're buying from the United States growers because they're going to have been reviewed and managed by the FDA.

Jackfruit is a weird name but it is a fruit. It has a little bit of a sweet taste to it. If you eat it raw but in general in cooking it kind of has a bland taste.  A very neutral flavor and easy to use in recipes to make delicious meatless meals that are filling.  It will take over the flavor of the dish it's being used in – so BBQ Pulled Pork recipes can be converted to vegetarian and when you use unripe jackfruit it has a firm texture that lends itself to being a meat substitute.  The ripe fruit is sweeter and usually used in dessert type recipes, but the raw jackfruit that is unripe is most popular as a meat substitute.

The fresh jackfruit can be 10 – 25 inches long (or longer) and about 5 inches wide.  When opened, it has many long individual fruits that are like seed pods, and those are what is edible.  The jackfruit seeds are what is taken from the raw fruit and made into dishes.

So, let's talk about why it's good for a vegetarian diet.

In a vegetarian diet, if you were used to eating meat and then now you've gone to vegetarian or vegan, eating jackfruit can give you a taste like meat because of the texture of the unripe fruit. It can have that shredded meat texture so it's great for putting into meals that are vegetarian versions of pulled pork or pulled chicken or tacos. It goes in all those things because it looks like and it gives you that visual impact of meat.  It also has the ability to take on the flavors of the spices that you're using in the recipe when you use fresh jackfruit, so you're gonna have it take up those flavors.  A lot of people who go vegetarian may think they need to use tofu or Tempeh and it's not going to have that same texture. So, the texture of jackfruit when you actually eat it is more of a soft tender texture of a whole fruit would be.  The meaty texture that is the tropical fruit of the jackfruit seeds is going to kind of be mushy in your mouth, it's not gonna be stringy, it's not going be chewy in your dish but can be great for a soft renal diet if you need to have easier to chew foods.

I do want to remind you that it does have very little protein so it's very much like a fruit in that manner.  It's not a meat in the protein sense, it's more of a fruit and has more carbohydrates in it nutritionally. It's going to have fiber in it and that's gonna be good and healthy for you but jackfruit has very little protein.  Make sure that you're getting protein in another way in that meal so that you're not totally eliminating the protein from your day.  With chronic kidney disease, you're going to want to eat lower protein so you're going to have that lower protein eating these jackfruit seeds.  It'll help you get a lower protein count for the day. 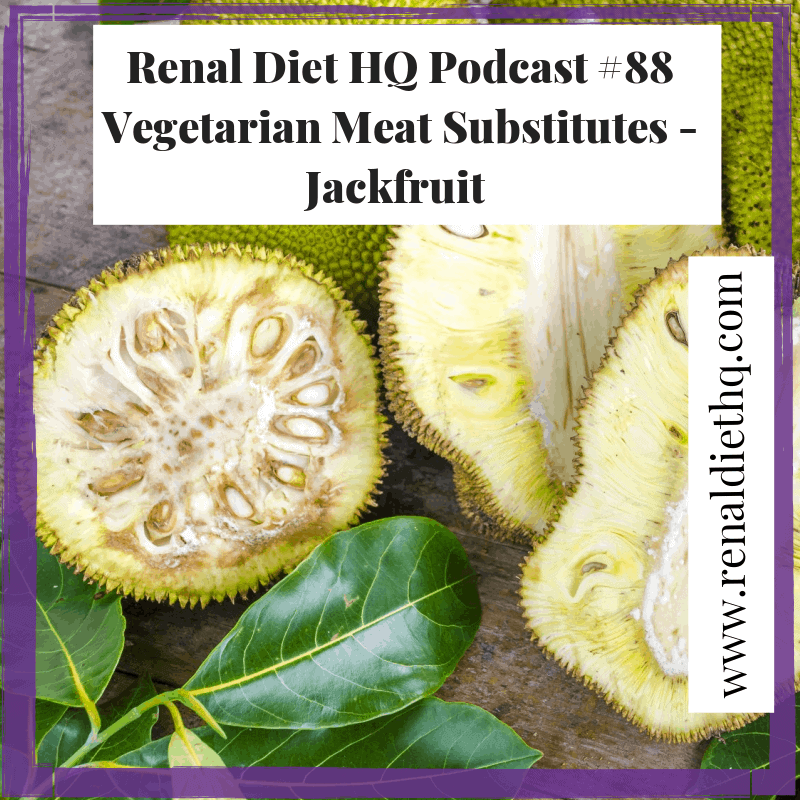 Why is jackfruit good for you if you have kidney failure?

Why is it a good choice and why might you even want to do it on a Meatless Monday even if you're still eating regular meat?

It doesn't taste sweet and it has some great benefits.

It has immune support because it has a ton of vitamin C and antioxidants. It's a perfect food for helping your immunity and helping boost your immunity to reduce colds and other illness and in general, I've talked to some other dietitians recently and found out that antioxidants are super great for your brain and your brain health so getting lots of foods with antioxidants is a great idea. Jackfruit is gonna fit right into that. It's going to help with your digestion because it has a lot of fiber so it's going to be like eating whole fruit.  It's going to have fiber in it and that's going help your digestion, help ensure you are feeling fullness, and satiate you.

It has some anti-cancer properties.  It's got phytonutrients, it's got carotenoids and it's really just a pretty healthy product. The raw or unripe jackfruit is going to have a decent amount of carbohydrate in it because it is fruit. Probably the amount of jackfruit that you're gonna eat in your meal [3 to 4 ounces] is not going to be excessive.  I want to make sure that you're aware that it's gonna have carb and that's going to affect if you're diabetic.  It can affect your blood sugar. But because it has carbs it can have that boost of energy that you might need for your day.

It's heart-healthy. It's going to have some potassium in it. Jackfruit has about 740 mg Potassium in 6 ounces (1 cup) so 3 ounces would have about 370 mg which is ok on a renal diet (of course, your personal diet prescription may vary.)   It is advisable for the amount of potassium is going to be decent and help you with your heart health because potassium helps your heart. It's going to give you beta-carotene, lutein for your eyes for bone health it has some calcium in it so it's going to help with your bones and it has water and it's gonna give you fluid.

Is it best getting the fresh jackfruit or would the canned jackfruit be okay?

It's kind of difficult to find it locally, so I would recommend the canned one. The one that's canned – they come canned in brine or in syrup and I would recommend the brine [read the label for sodium content if it's in brine] and I would definitely try to find it at your local Whole Foods or Trader Joe's. They have it in the canned version. The brine is sodium so you're gonna have to watch that amount of sodium that comes in there but you can rinse it off a little bit too that'll help with reducing the amount of
sodium that's in a canned product.

It's always a balance for your kidney diet, so if you can find locally the fresh one or you can order it then I would recommend considering that.  If you can't find it locally, or you want to buy and have it, the fruit can sit on your shelf for a couple of days. You may even continue to ripen it but you want to use that quickly.  Whereas if you bought the canned you could take it with you so consider looking at the sodium on the can and figuring out if it has a lot of sodium.  You may want to pick the one that's in syrup just to reduce the amount of sodium that you're getting because I know that can be a huge concern for people with kidney disease.

Where to find jackfruit?