You are here: Home / Renal Diet Headquarters Blog / RDHQ Podcast 98: Does the type of protein matter for CKD? Plant based or omnivore diet for kidney disease? 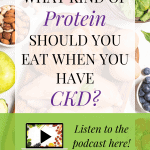 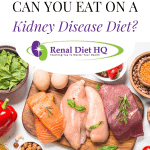 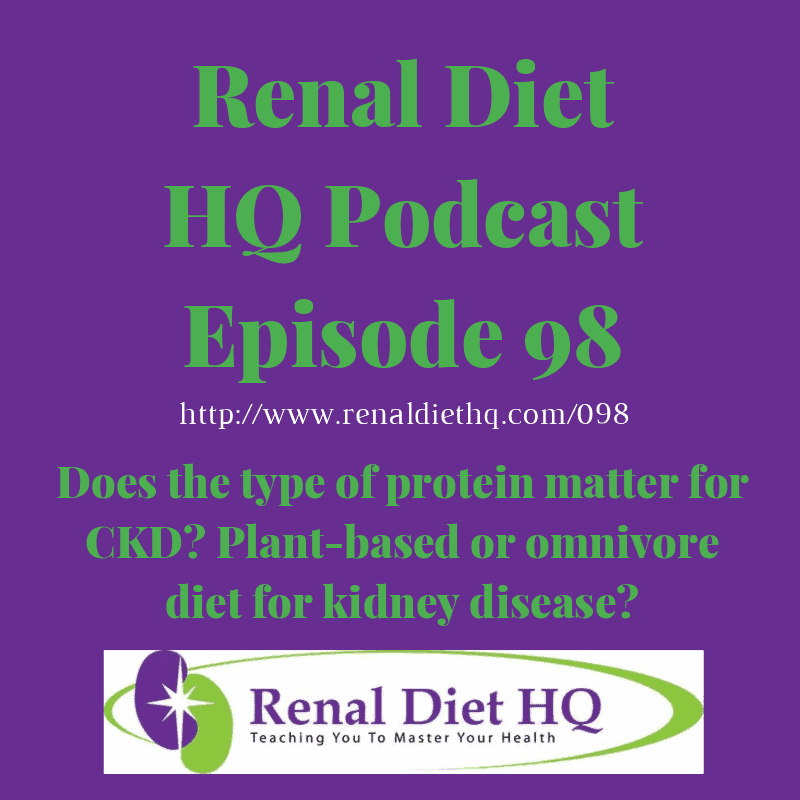 Hi there! It’s Mathea Ford with Renal Diet HQ and today I wanted to do a quick live on whether the type of protein that you eat matters in chronic kidney disease, whether you should focus on a plant-based diet or something that is omnivore using animal protein so I wanted to talk about a couple things and one of them is that the kidney diet restrictions for chronic kidney disease prior to dialysis your protein limitation is typically from stage three to stage five 0.8 grams of protein per kilogram of body weight. So, you need to figure out how many kilograms you weigh and then multiply that by 0.8 and that gives you the total grams of protein. Most of the time on a label you will find grams of protein listed so just overall for that if you’re on dialysis it’s usually double that so it might be like 1.5 to o1.6 grams of protein per kilogram and that’s because you’re losing a lot when you do dialysis you lose a decent amount of protein so it’s important to replenish that. So, that was number one.

Number 2, I wanted to remind you that lots of foods have proteins so you may be thinking about protein products as things like meat or fish maybe even cheese and dairy or milk and those do have protein. You also have beans and legumes, you have pasta and bread so the wheat flour in those products and other types of flours have protein things like quinoa have protein.

You can get protein from lots of sources. Vegetables can have protein you know a small amount but if you’re counting all of it it’s important to pay attention. The third thing is that when you’re thinking about protein that you eat you need to kind of divide it in half and make sure that you’re getting at least half of your protein from high biological value proteins. Those are things like your milk or your animal sources if not animal sources at least good sources of protein in a vegan diet which might beans and legumes but just make sure that you’re getting about half of your protein from that and then the rest of your protein you’re going to get in other places in your diet like vegetables or pasta or those types of products so.

Okay, so you kind of have a contrast – do you do omnivore or do you do plant-based, vegetarian?

Vegetarian protein sources again to remind you those are like beans legumes depending on what type of vegetarian you’re talking about it can be milk and dairy products and those are when you eat a vegetarian or a plant-based diet you’re less likely to do protein overload and that is because when you are getting your protein from beans, legumes, milk, cheese those products have other parts to them so a piece of animal meat may only have protein and some fat whereas like beans and legume have fiber, they have carbs, they have protein so you’re going to get full and you’re not going to want to eat as much of that. An ounce of beans still has the same amount of protein as an ounce of beef or animal product but you also got in that several grams of fiber and carbohydrate and that’s going to help you to feel more full so people don’t tend to overload on the protein on that diet on doing plant-based.

If you’re concerned about phosphorus on dialysis or later stages of kidney disease, phosphorus amounts in foods you need to be aware that when it’s organic so the type that’s just naturally in the food so beans, legumes have organic phosphorus in them that is not absorbed as readily and in your body so you only absorb maybe 50% of that whereas your inorganic phosphates or your animal product phosphates. Animal product phosphates tend to be absorbed at the 80 to 90 percent range and inorganic which is just added phosphorus which you would find on your label and you’d see the word Phos in there. That type of phosphorus is absorbed at like 95% or higher so when you’re eating plant-based products you see that they have a little bit more phosphorus but they don’t necessarily didn’t necessarily absorb as much of that because of the components of the plant-based diet.

Again, your potassium amounts vary I would encourage you not to restrict potassium unless you have a high potassium blood level and I talked about that in the labs course that’s getting ready to come up out here in October but it’s really important to restrict sodium and protein amounts but not necessarily other labs unless you
have a reason to.

And also it’s found that protein-based plant sources, when eaten, have a lower and create less inflammation in your body so you don’t get a reaction to that as far as an inflammation affects your albumin levels which are your nutritional status but it also affects your kidneys and everything else so you want to have lower inflammation levels.

Animal-based diet so your meat, your chicken, your poultry, your fish those are all going to be things that you about an ounce of meat is about 7 grams of protein so typically you can eat you know 4 to 6 ounces of protein a day but you’re going to make sure that you watch your portion size on those just to be really cautious. Animal-based products are something that we’re used to eating but you may want to eat less of them so you may want to start doing things where you’re combining them with other sources of nutrients like you may make a casserole with some meat and vegetables and pasta versus just eating a piece of meat or eating a hamburger so it kind of makes it more filling of the meal.

The phosphorus and other CKD-MBD which is Chronic Kidney Disease Mineral Bone Disease Labs are improved with a plant-based diet and they don’t find that same improvement with an animal-based diet. So, as of right now the recommendation is moving towards more plant-based but what I would tell you is that you should consider what you’re going to eat.

If you are totally  against being a vegetarian or you’re like I can’t stand to not eat meat then what you may want to do is pick a day of the week where you do a plant-based meal that day and have that as your vegetarian meal of the week and see how you can incorporate that into other things so instead of always having meat at two meals a day you may want to consider having meat at one meal and more of a vegetarian plant-based diet at the other meal so that you can kind of work it in and have that balance and that will reduce your inflammation, reduce your reactions and give you less phosphorus get you a little less protein but I would recommend that you certainly
do that and I also on my blog I wanted to tell you that I have a couple of plant-based recipes one for like a Bean Burrito and another one for some couple things so I’m going to put those in the links below the video and I want to encourage you to try to add a little bit more plant-based meals to your diet.