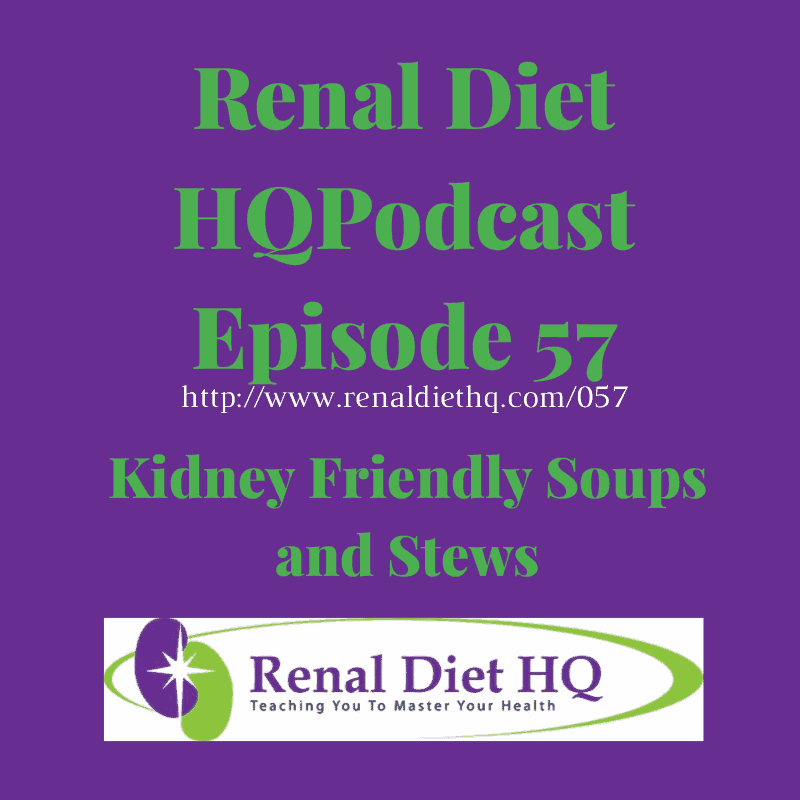 Welcome to the Renal Diet Headquarters podcast with your host, Mathea Ford, CEO of Renal Diet Headquarters. This is our weekly talk about how you can succeed with a kidney diet. Brought to you by renaldiethq.com, a website whose mission is to be the most valued resource on kidney disease that people can use to improve their health.

Oh, my gosh. What is it doing? How do I tell it to stop doing? Hey. Okay, there we go again. Sorry, I was playing with some of the controls before the Go Live. This is Mathea Ford with renaldiethq.com. And I was playing around with some of the different things that Facebook Live does beforehand. And obviously I just turned one on that I didn’t mean to and had fire breathing from my mouth. So, it is another day. And today I want to talk about kidney friendly soups and stews because that is a food that’s like a comfort food. And honestly, today I’m not feeling very good. I had a migraine a little earlier. I took a little nap, so I feel better. But, there’s going to be days when you don’t feel good at all. You’re tired, you have anemia, you can’t get around as much, your bones ache, and just general side effects of kidney disease and honestly, getting older, which I have myself, and I’m 45, so all those things together makes you kind of like some comfort food every now and then. So, if you’re not on a fluid restriction, which most of you probably are not, then you can try some of these soups and stews and have a nice comfort food.

The other best part of this is you can put some in the crock pot and cook it all day. And then also you can cook a double or a triple batch and really save that for next time. So you can save it in little quart size containers and just have your portions already done and then take it out, put it in the microwave and warm it up. And there you go. You got some quick food for you to eat that’s really good because you made it yourself and it’s not too salty and all that stuff. So, today I wanted to give you just a couple of kidney friendly soups and a stew that I like. I say a couple really just one of each. So the first one is chicken noodle soup. I have recipes on my blog for chicken noodle soup, and I will put the link in the information below. But the way you just do that is you cook some chicken breast. For you, it’s going to depend on if you think about how many portions you’re making and how much you’re going to get out of it. So, if you’re making four portions, for example, and each one is a cup, you’re making four cups, then you’re going to want to make sure that you’re only using about a pound of meat so that you’re each going to get 16oz as a pound of meat.

Cut that into four sets, 4oz each, and by the time it’s cooked, it’s three. So, that’s going to give you quite a bit of meat in your portion size. So, you may even make that a six portion. So you’re not overdoing it on the protein. But basically you cook your chicken, you chop it up and then you put a little bit of unsalted butter in the pan. You do some celery, you do some carrots, you do some onions. Those are all really yummy vegetables. And you can even put a little bit of flour in the pan. After you’re done cooking up the onions and carrots and celery to thicken it up a little bit, the flour with the butter makes what’s called a roux, and it’s a little bit thick. And then you add some most of your chicken broth that you may make yourself, or some of the unsalted chicken stock or broth from the store. And then you can add egg noodles, which are not going to add a lot of protein, but are going to be good, healthy, kind of adding a little bit of bulk to the meal. And you simmer it for five or ten minutes because everything’s already cooked pretty much.

So, you’re simmering it just to soften up those vegetables in maybe 30 minutes. And then you’ve got some soup. And like I said, the best thing you can do is double or triple that recipe and then put it in a portion size containers, freeze it, and you got food for the rest of the week or the month or next time you need it. So, let’s talk about some beef stew. So first of all, with the chicken noodle soup, you can do that with just veggies, so you don’t have to add any sort of chicken to it if you’re vegetarian. And so the beef stew, the thing you can do is you have about same deal with the meat. Think about how many portions it’s going to be. You want to try to end up with about 3oz of meat per portion, which is actually quite a bit of meat in a stew. So, you may even go a little lower than that. So if you’re wanting to make like six portions, you use a pound of meat, that gives you a little bit about 3oz each. You’re going to do some celery, you’re going to do some carrots, a potato, if you’re concerned about potassium with the potatoes, you’re going to soak it and remove the potassium, leach some of the potassium out.

But if you’re not too concerned about potassium, just add the potato and onion, chopped. So you’ve got celery, carrots and onions common between these two recipes, so you can make those up. And then some garlic and mushrooms. You’ve got a little bit of beef broth that can come into the play. And then some flour to dredge. So you’re going to chop the meat up and dredge it in the flour in little pieces so it kind of gives it some meatiness to the thickness of it. And then brown the beef, remove those pieces, put all the vegetables in there except the potatoes, and cook them with a little bit of butter. Let it cook for a little bit. And then add the broth and cooked beef and boil it, and then let it simmer for 30 to 40 minutes and add a little bit of spices if you like them. I personally like a little cumin. Cumin is kind of a fajita meat season, and it really tastes good in all kinds of food. Then you can add to that the beef stew. So, the potatoes are kind of like the egg noodles are in the chicken noodle soup, but you can add a little bit of noodles to this one if you like, instead of the potatoes or rice instead of the potatoes.

Same thing with the chicken noodle recipe. It wouldn’t be chicken noodle soup, but you could add rice instead of the noodles. So, if you’re just looking for something to change it up a little bit, you can do that. And those should be some nice, healthy, kidney friendly recipes. The salt you’re just going to have to watch with the low sodium broth, how low sodium it is. If you want to cut it in half with water to try to make it a little lower sodium, that would be great. If you want to make it on your own, boiling the bones or boiling vegetables and making the broth, that’s another good idea, too. So, that’s what I wanted to talk about today. I hope you have a great day and I hope you’re looking forward to your next week. It’s Sunday, so hopefully this is kind of a little bit of a nice day for you to just relax and think about making some yummy stews or soups that you can then have for the rest of the week and warm up. Or if you’re caring for someone who has kidney disease and you’d like to like, for example, my father lives with me and he likes eating chili, so I sometimes make up a big pot of chili and he just eats that throughout the week because we all know chili tastes better the next time you cook it.

So, he’ll just take a scoop of that and then obviously after a week in the fridge, it’s not necessarily the best thing to do to leave it that long. So I might take some, put it in packages and freeze it if there’s still some left. But honestly, that’s one of the best things I can do for him, because that’s, for him, a good, easy way to eat and get some nutrition and not have to worry about making something. And it’s healthy because I made it. So, have a great day. Again, this is Mathea Ford with renaldiethq.com. Head on over to the website and on the front page, renaldiethq.com, there are four buttons. You can click one to say whether you are new to kidney disease, whether you have diabetes and kidney disease or dialysis, and you’ll get a free seven days of meal plans. And then you can look on that further and see what else you might be interested in. Have a great day. Bye bye.

You’ve been listening to the Renal Diet Headquarters podcast. Head on over to the website at www.renaldiethq/go/email to sign up for our email list and get exciting updates every week on what is happening. Thanks and we will talk to you again next week.