You are here: Home / Renal Diet Headquarters Blog / Who Is Most Likely To Experience Renal Disease? 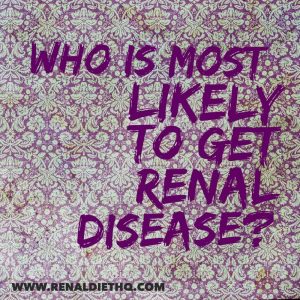 Among developed countries, Americans are significantly more likely to experience renal disease. There are groups of people that are more at risk than others within the United States, however.

Who is at risk?

Truthfully, everyone is at risk and renal disease does not discriminate, nor do its other chronic counterparts such as cardiovascular disease and diabetes. Some groups of people, however, have shown to have higher occurrence rates of renal disease than others. These groups include African Americans and Hispanic Americans. Men are also more likely to have renal disease than women, but it affects all people regardless of ethnicity or gender.

What are the risk factors?

There are a number of risk factors that can put a person at risk for renal disease. Most of these risk factors involve lifestyle choices, such as smoking and maintaining a poor diet. The biggest risk factors of renal failure are diabetes, high blood pressure, obesity, smoking, and cardiovascular disease. Some risk factors can also be genetic such as family history and age, as people over the age of sixty are the most likely to experience renal disease.

What can I do?

To avoid the risk of renal disease, or to slow the progression of the disease after diagnosis, there are a few things you can do to help. Probably the most important is maintaining a healthy diet. Focusing on primarily plant based meals, meaning lots of fresh vegetables as well as lean protein and whole grains, is your best start. If you have high blood pressure you should avoid sodium. The typical American diet includes a lot of processed foods, and this just isn’t healthy. It is best to avoid any food that comes in a cardboard box, as a rule. Instead, focus on whole, “real” foods.

Aside from diet, you can also get plenty of exercise. There are exercises that you can do at every level of fitness, so find what works for you and start there. Just 30 minutes of exercise a day can make a huge difference.

Talk to your doctor about your risk factors and what you can do to be the healthiest you possible. It is important to keep up with your doctor so he or she can monitor your progress, and of course you should speak to him or her about any changes you plan to make.

Renal failure is a huge problem, especially in the United States. There are many risk factors for renal disease, but no one is immune. Know the risk factors, talk to your doctor, and maintain the healthiest lifestyle possible to avoid becoming another American health statistic. Instead, be the best and healthiest you possible. Click here for more information on renal disease.