You are here: Home / Podcast / Renal Diet Podcast 075 – Its Too Late To Change, Other Concerns 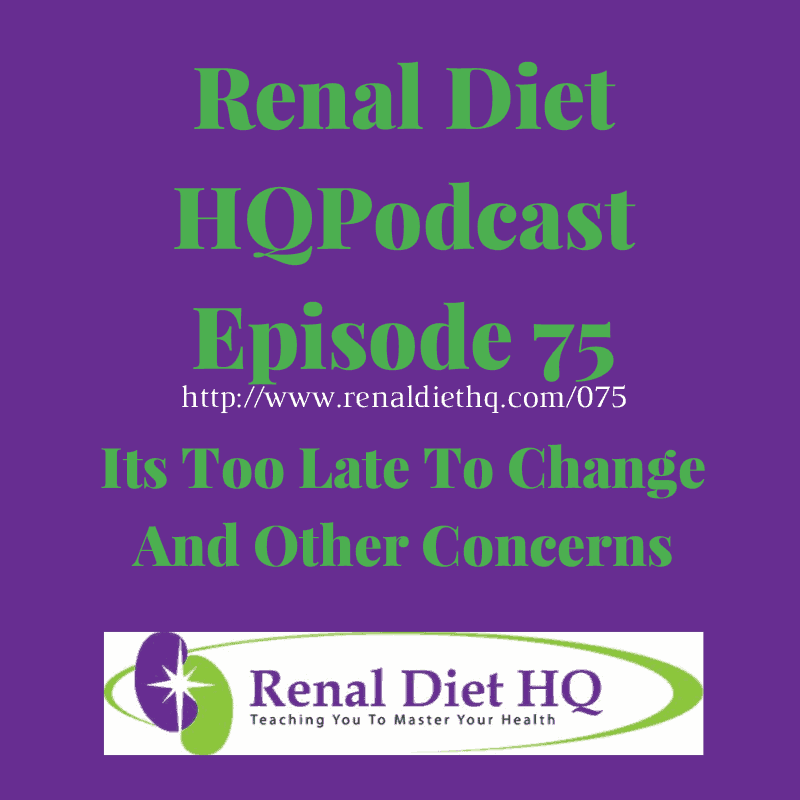 Its Too Late To Change And Other Concerns

“It’s too late for me to change. I should have started sooner! Why is this happening to me? How long do I have?”

Do you have these concerns?

I will be giving you my feedback on what those questions really mean.

My answer to you is it’s never too late. Just making the changes now will improve your life going forward.  You can have a better quality of life you make changes and you get your food and medication and process going in the right direction. It’s never going tp be too late in my eyes for you to change.  You can make small changes everyday at that’s exactly what I encourage but as long as you’re alive, it’s not too late.

But it’s not. Because the answer is yes, you should have started sooner but what good does that do?

That’s saying, “I should have stopped.” You’re not being proactive and accepting that that’s the past, so honestly that’s the past and you can start today, you can start right now. It’ll still change the future. The good thing about the future is it’s not determined already. Past is the past, it’s done, the present is right now and you make a choice in the right now and do that but the future changes based on what you do in the right now and every minute that you delay making those changes, making the improvements is a moment that you’re missing out so I say you make the changes and see what happens. Because what if your life does improve?

The worst that can happen is it stays the same right? You make better improvements and it doesn’t get you a whole lot better. You’re not any worse off than you were before but if you make those changes and you start feeling better and things improve then you’re doing pretty good. So, I encourage you to start right now and stop saying to yourself, “I should have started before or it’s too late” because the answer is it’s never too late and you should start right now.

Making those changes, what are those changes I’ve talked about are in the other videos. You got my website renaldiethq.com, I have lots of information on what to change.

Asking yourself “how long do I have before something happens?” The truth is medical science doesn’t know exactly. All of that depends on what you’re doing right now, what changes you’re making, meds you’re taking and kind of your predisposition to that. Just know that you have time and even if it does change, even if you switch to stage 4 or stage 5 tomorrow, you still can make positive changes that will improve and slow down the progression of your kidney disease.

I suggest that you have your little bit of upset and frustration but then you take the positive route of saying, “this is happening to me and I can change it so I don’t have to just accept that I have kidney disease and I have to wait till dialysis.”

Asking like what’s foods are best. In my opinion, the best foods for you are the foods that you’re going to eat because what’s going to happen is you’re going to start to feel weak, you’re going to feel tired, you’re not going to feel like making things and so if something that you like is on the “Naughty list” so to speak. If you are eating a little bit of that will get you, so you’re eating and hungry and eating the rest of your regular healthier food for you then I think maybe you should try that to get you eating.

If you’re having no problems eating and you’re just having difficulty with accepting that foods are best for you then know that it’s healthy foods like whole grains with fiber to help with getting things through your body and its things with healthy fruits and vegetables, lower amounts of protein, plenty of fluid and that’s pre-dialysis.

I want you to know, in my opinion there’s no cure. Lots of people will tell you there’s a cure for kidney disease which isn’t really a cure but it’s an improvement is a transplant. And I hope that everyone who wants a transplant can get one. That’s just not the case usually so in my mind if you’re thinking there’s a cure then that means you’re delaying action or you’re trying to think, “Well maybe I don’t have to behave because there’ll be a cure and I’ll be able to not have to deal with this.”

Deal with this right now. Deal with your kidneys and use that to improve your life and improve the life of those around so let people know you need certain things to help your kidney disease. Exercise, eat healthier, take advantage of this opportunity you’ve been given to improve your health.

I’m feeling a little bit today like I need to tell you that this is a reality. The reality is if you have kidney disease you need to deal with it. You don’t need put it off until tomorrow and you need to say, “I can’t change anything” because both of those are not good options.

You can change right now, you can do what you need to do, head on over renaldiethq.com I have a kidney diet starter kit that gives you 7 days worth of meals – breakfast, lunch, dinner, snacks, recipes, grocery lists – all that stuff and it gives you some videos to talk about what’s going on. It has a short little audio that you can listen to that is me going over how to change some recipes.