You are here: Home / Kidney Dialysis / Living With Kidney Disease: Sodium and Eating Out 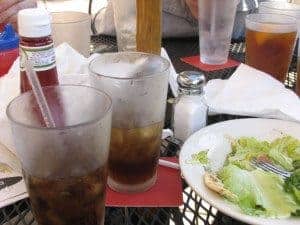 Just about everyone struggles with the temptation to eat out more than they should. For people living with kidney disease, however, this decision has the potential to have more dire consequences. There are perils involved with sodium and eating out, and they shouldn’t be ignored.

In many restaurants, the idea of “healthy” is relative and might not actually be very healthy. These options might certainly be healthier than other options on the menu, but they won’t necessarily fit into your dietary plan. Be wary of options that might be low-calorie, but are still full of saturated fats, carbohydrates, and a surprising amount of sodium.

If there is one thing everyone’s favorite restaurants get right, it is sauce. Sauce for your entrees, sides, desserts, and maybe a little on the side for extra flavor. These sauces are delicious, but they are typically loaded with extra sodium and all sorts of extra things you just don’t need. Restaurant sauces are delicious, but they are not very good for you, and it’s hard to avoid them. Pretty much every dish has some kind of sauce, and a lot of it, it can be hard to be aware of just how much you are consuming.

Another tragic part of all those sauces, as well as many sides and even entrees, is that they are likely pre-made. This means that you can’t even request that they be made with little or no salt. This is not to say that every restaurant works this way, but honestly most do. It is faster and easier to make some dishes and sauces ahead of time and either keep them warm or heat them up before serving. So even if the server eliminates any extra toppings on certain side dishes, entrees, or desserts, the extra sodium is already cooked in.

All of that unaccounted sodium and eating out can really sneak up on you. When you have kidney disease, every bit of sodium is important and likely to affect your overall health. You could be in real jeopardy if you consume too much sodium. Unfortunately, it is all too easy to have all that sneaky sodium creep up on you when eating out.

Let’s face it- cooking at home is a lot more cost effective. With all of your extra medical bills on top of everything else, it couldn’t hurt to save some money and be healthier at the same time. Cooking at home saves money, and you have more control over what you are putting into your body.

The cost of eating out is more than just the money you spend to do so, however. It is the ultimate cost to your health and well-being. To extend your life and comfort, you want to be careful and abide by the dietary restrictions that your physician has given you. Eating out just isn’t worth the cost of your health.

Everyone eats out every now and then. In some cases, you can make smart decisions and find things that are appropriate for your diet on a restaurant menu. Just make sure that these trips are few and far between, no matter how tempting it is to eat out often.

You have to be careful of sodium and eating out.  Click here to learn more about your options.