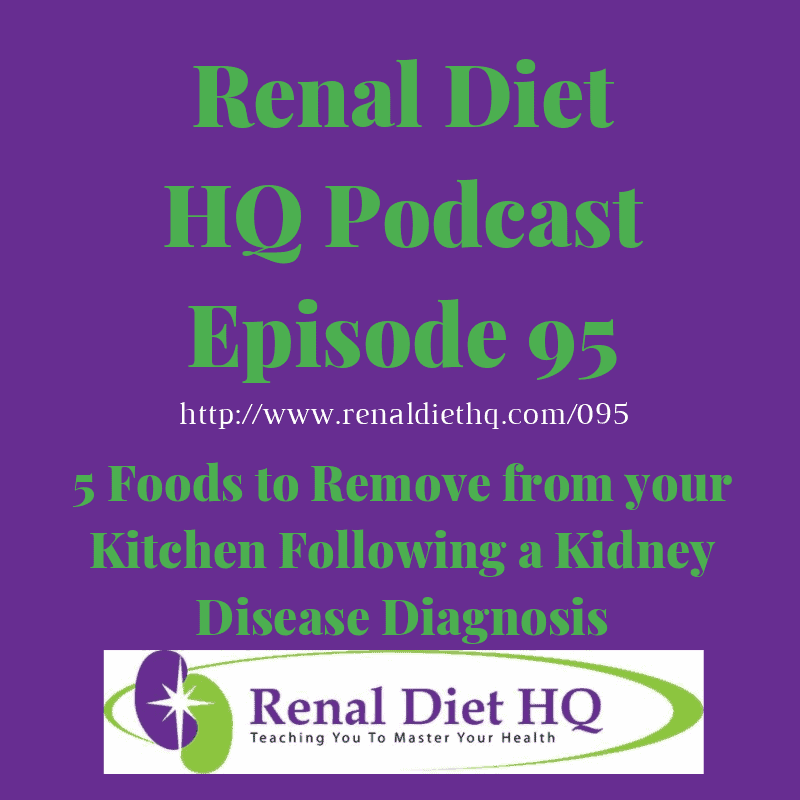 Hi! This is Mathea Ford with Renal Diet HQ. I wanted today to talk about five things to remove from your kitchen following a kidney disease diagnosis.

There's a lot of yes/no foods, can/can't and I'm not big on yes and no foods but I am big on kind of some major changes that you're going to need to make look going forward to improve your health. One of the easiest first things you can do is remove some of these big offenders from your diet starting out.

Let's start out talking about canned soups number one. Canned soups so canned soups are basically liquid salt and you should really try to make your own soups. I have a lot of recipes for soups on renaldiethq.com. On the right hand side you can see all the recipes and there are several different soups in there but really you can do your best to make your  own broth and then try to make your own soups with that broth to improve your health and those are easy because even though they're inexpensive they're really just salt they're not a whole lot of nutritional value.

Number two would be processed meats. Things like canned meats like spam, hot dogs, cured meats like pepperoni or prosciutto. Now, fresh meats like chicken or fish sometimes deli meats you can get lower sodium. Deli meats so you might look into that and you can also do like some look at some of the cans like canned chicken it may have lower sodium you may be able to find the lower sodium version of that but if you really can just cook a chicken breast. Chop it up and make your own little chicken salad or something that'll be real easy but just watch out for the canned process meats and in general highly processed foods you're going to want to look at the amount of salt that's contained in them because you're trying really to reduce the amount of salt in your diet.

Number three tomato sauces. I'm not a never tomato person. I know there's a lot of people that say “you know oh! I can't eat tomatoes” but in the beginning trying to improve your diet things that are tomato sauces can be high in salt and they can be high in potassium so things like ketchup as well as pasta sauces. Things like marinara you may want to eat less of or use a little less of. I also like so if you're using marinara on a spaghetti, for example, you can do like a butter sauce or a lemon sauce maybe a little higher in fat than the tomato sauce which you can make it lower sodium.

I'm seeing a question about what about pickles? Can I find no sodium pickles?

No. Maybe I have never seen lower sodium pickles but I've honestly never looked for them but basically, the process of creating pickles is using a salt brine so it's definitely never going to be that you're going to find no salt pickles but cucumbers which is what pickles are made of are perfect. Raw cucumbers chop them up, salt you know put them in a little soak them in a little vinegar and they're really good but in general, you might have to look to see if they have any no salt pickles. I haven't heard low sodium pickles I've never looked for those.

Number four instant ramen. A lot of times it's inexpensive and easy to make things like instant ramen and noodles are generally kidney-friendly. You usually can eat those just fine but the flavor packet in any of those pre-prepared pasta dishes are going to be really high in sodium just like all the processed foods that I was talking about. So, you might try cooking your ramen noodles and maybe putting like a light vinaigrette on them you could make your own.

We talked about that a couple of weeks ago. Making your own salad dressings with oil and vinegar and a little bit of different spices. You can do that or you can just pick like a balsamic vinaigrette or something like that but to put on your ramen noodles they can be a little high in fat but you're just really trying to reduce the amount of sodium. You also may start with just regular noodles like some egg noodles or something like that.

And I just want to remind you that a renal diet doesn't mean giving up everything that you love, it's definitely not more about moderation, more about limiting portions so if you want a little tomato sauce you can have a little just don't eat as much as you may be used to definitely moderating the sodium. And you want to remove some of the biggest offenders like I just talked about so try to work through that.

So, are you on dialysis? You are told you need to lose a little weight because your BMI was a little high told to start this diet.

Losing weight is a little different than just removing these items but really losing weight is about deciding what you're kind of going to eat for the day so in some times we tell people to write down what you ate and then to follow that and look at it and count your calories and stuff.

I kind of take the approach where you plan your day. So, you're going to look at your day and you're going to say “okay, today I am going to eat breakfast this item, these items. Lunch these items. Dinner, these items. I don't think you need to plan out a whole week. I think you really need to do it one day at a time either first thing in the morning or at night before you go to bed and look at “okay, tomorrow morning for breakfast I'm going to have X. I'm going to have an egg and you know a piece of toast with a little bit of butter. And so you would start doing that and then basically, you're planning a good meal. It doesn't have to be perfect because it takes just baby steps to lose weight so start that and try to plan your day ahead of time and then as you get better at that you start to see portion sizes and then you start to see “okay, I need to get a little lower this or look at a little lower fat” and so you can try to do some of those things. So, I would encourage you to do that. If you're thinking about losing weight is to plan your day one day at a time a little bit ahead.

You're not on dialysis but you're looking ahead thinking about a transplant and you want to lose a little weight which is totally completely fine and then with exercise just work it in there when you can and whatever your doctor says is appropriate but you may be able to do a little bit of exercise if you can't go outside because it's super hot right now especially here in Oklahoma. Then you may want to do some chair exercise or arm you know exercise where you can get that activity going.

I want to say thanks and I don't want you to give up all the foods you love but I do want you to pay attention to kind of lower sodium, lower potassium, and help and really the sodium is going help you with a lot of things. Thanks for sticking with me today. Talk soon!