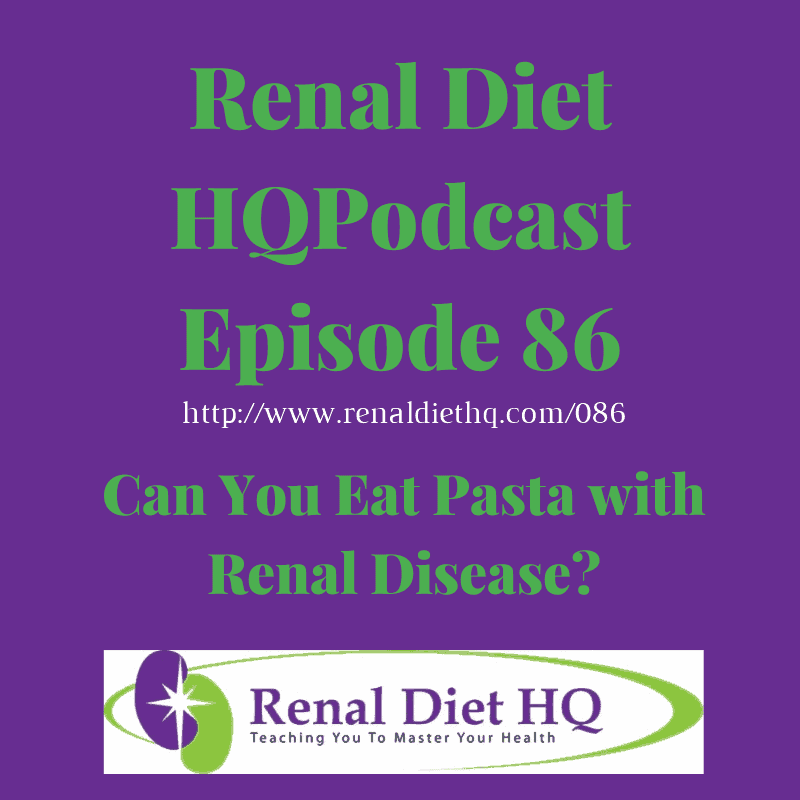 Renal Diet Podcast 086: Can You Eat Pasta with Renal Disease?

I want to talk to you about eating pasta on a kidney diet because believe it or not it's actually national noodle month. March is National Kidney Disease Month or Kidney Awareness Month and it's also National Nutrition Month so as a dietitian, I'm interested in all of those.

So, I wanted to talk to you today about eating pasta on a kidney diet because a lot of times we see here all these weird diets and I shouldn't call them weird but they're weird, like low carb, Atkins – all that stuff and those diets might work for someone who is not experiencing a chronic disease and not dealing with a chronic disease but you, if you have kidney disease or you have a family member who has kidney disease, then you're one of those people that really needs to follow a more traditional diet without trying to eliminate everything because you're already going to have to manage and minimize some of those things that you already are eating like protein.

Pasta is kind of like its a little bit harder to give you nutritional information on because pastas a variety of things – it's noodles, it's egg noodles, it's rotini, it's spaghetti – it's all those things so I can't tell you specifically depending on the brand you certainly can look at the label but it's definitely going to be lower potassium, lower phosphorus and potatoes. One cooked spaghetti serving which is usually about a half a cup has about 200 calories 7 mg of protein and 40 grams of carb so actually that's probably closer to a cup if it has 40 grams of carbs and some fiber and it's going to be enriched so it's going to have some extra B vitamins in it. So, if you had about a cup of cooked spaghetti you're already getting seven grams of protein just purely from the flour that's in the spaghetti so if you're protein just purely from the flour that's in the spaghetti.

If you're managing the amount of protein that you're eating you want to be aware that pasta can be a source of protein; it can be good, if you're on a vegetarian diet, it can be a good source of protein for you there. It's typically low in phosphorus and potassium and that's something that a lot of people are watching and it can be low in sodium; you just have to look at the label to be clear. But when you're doing it, the main thing is to make sure you're not putting it with things that are high in sodium or high in phosphorus and potassium like red sauce. If you're going to have red sauce you might want to make your own and that you can make it in a little lower sodium version.

White versions of pasta in your meal. You want to avoid like the whole grains just because they tend to have a little more potassium and phosphorus in them so if you're really concerned about that you want to stick to the whole grains. Watch out for the sodium content again, just make sure that whatever you've got, you've looked on the back of the nutritional panel, picked the one with the lowest sodium content and stay away from pastas with added protein. Sometimes, I already said you have about 7 grams of protein in a cup and sometimes they add protein just for vegetarians or people who may want to eat more protein that's not you so go ahead and watch for that feature because you don't want to pick those you want to manage the amount of protein whether you're on a diabetic or a pre dialysis diet and you should definitely eat in moderation just knowing that it's 200 calories in half in a cup can be a lot of calories if you're trying to gain weight that can be fine. It can be filling so it's good; you just have to watch the portions. Really, that's the main thing that you need to pay attention to.

We have a recipe on the website, Chicken Noodle Soup. It's the most popular vlog post I will see if I can put a link to it because it is the most popular vlog post on my website and people love it and its got noodles in it. It's a low-sodium chicken noodle soup and let me see if I can. So, if you want to go over there, you can print the recipe or you can sign up and it'll send you the recipe in a PDF form. That's the main thing that I wanted to review today on the blog post that I put in there; there's also the blog post that talks about pasta in a renal diet kind of goes over everything I talked about that also has some other recipes that are good for people with kidney disease.

The other thing I wanted to talk about today, I've been feeling this urge to be grateful and to show a lot of gratitude and I've heard that a lot in people around me saying I'm grateful for this or I try to be grateful for things or I find things every day to be grateful for. So, I wanted to talk to you today because I'm going to do a five day challenge on the Facebook page and so between now and Easter is coming up on the 1st of April this 2018, so we have 5 days including today Tuesday Wednesday Thursday five days. Yeah, something like that. Anyway, between now and Saturday, everyday I'm going to post something that I'm grateful for and I would like you to go to the blog post or not to the blog post to the Facebook page and tell me something that you're grateful for.

I think we're all grateful for a lot of things and we forget to take a minute to say “I'm really glad that I have this in my life.” Maybe you're grateful for your grandchildren, I'm grateful definitely for my children I had a very difficult second pregnancy, the first one was kind of tough and the second one was really tough and if you don't know the story and I probably have never told you, my daughter was born at 27 weeks and she was 1 pound in 40 ounces and yet, I can post a picture of her in the Facebook page but she looks just like a normal sixth grader today and I'm grateful for all that she has and become and I'm grateful that you know we have modern medicine and we had access to that medicine when she was born. So, I remind myself that sometimes I have so much to be grateful for and yet I spend a lot of time thinking about things that I'm not so grateful for so I want to spend the next five days using a lot of my extra energy to show what I'm really grateful for. So, I'm going to post in there I'm going to say something every day that I'm grateful for and I'd like you to add and that's going to start after this live video I'm going to go in and create that post and so I'd like you to add to it if you can and then last thing for the day is I wanted to just remind you that you have a lot of you have everything within you that you need to overcome whatever difficulties you're having so if you're feeling like the kidney disease is really hard or the renal diet is really hard you do have whatever it is you need information but it's within you that you can do that so I just want to remind you and be your encouragement today that don't ever forget that you are the one who can make those changes and you're able to do those things.